Kenya is located in East Africa. Its terrain rises from a low coastal plain on the Indian Ocean to mountains and plateaus at its centre. Nairobi sits at an altitude of 1,700 meters. Within this valley, in the deserts of northern Kenya, is the famous Lake Turkana.

Kenya’s location between the Indian Ocean and Lake Victoria means that people from all over Africa and the Middle East have travelled and traded across it for centuries. Scientists think Northern Kenya may have been the original birthplace of humans. The bones of one of the earliest human ancestors ever found were discovered in Kenya’s Turkana Basin.

Kenya was a colony of the United Kingdom from 1920 until 1963. Since its independence, it has been a republic, with a president, a national assembly, called the Bunge, and devolved local governments. Since 2013 there are 47 Counties each with their own Governor and Senator.

In Kenya, more than 60 languages are spoken and there are more than 40 ethnic groups. Famous tribes include; the Maasai, the Kikuyu, the Turkana and the Luo.

Almost everyone speaks more than one African language. For centuries, people throughout the country have used songs, stories, and poems to pass on their beliefs, history, and customs. 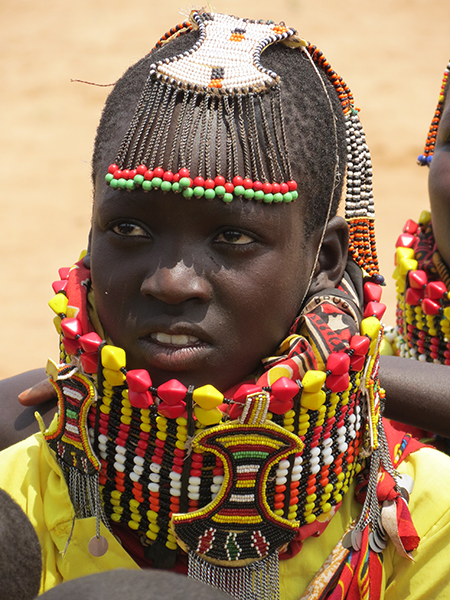 The United Nation’s HDI (Human Development Index), classifies Kenya as one of the world’s least developed countries, ranking 40th from the bottom. Comparatively, Ireland ranks as the 6th highest developed country in the world. Kenya’s economy has experienced good growth in recent years but still today, 40% of Kenyan’s live below the international poverty line of $1.90 per day.

Kenya’s services sector, which contributes about 63 percent of the Kenyan economy, is dominated by tourism. Agriculture is the second largest contributor to Kenya’s economy. The principal cash crops are tea, horticultural produce (flowers), and coffee. Kenya is the third largest exporter of cut flowers in the world, accounting for around 35% of all sales in the European Union. Kenya is East and Central Africa’s hub for financial services, an industry which has grown significantly over the last decade.

Approximately 3/4 of the Kenyan population live in rural areas, with many rural people relying on subsistence farming. Accessing water remains a challenge for many rural Kenyans, with up to 40% of the population living without access to clean and safe water. Rural Kenyans increasingly experience the impact of global climate change as droughts occur more frequently and more intensely.

Kenya has experienced a huge level of internal urbanisation over the past 3 decades, with many thousands of people moving away from traditional rural lifestyles to the cities and towns in search of a better life. In the cities, many poor people live in informal settlements, such as the Kibera neighbourhood in Nairobi. Most of Kibera’s residents live in extreme poverty. Unemployment rates are high. There are few schools, clean water is scarce, and residents lack access to basic services such as electricity and medical care.