Skip to content
Previous Next
Turkana Drought Appeal: Update on the current situation

Fear and concerns grow for Turkana as no long rains expected in Kenya.

Since our CEO, Anne Cleary visited Turkana in February and we launched our Turkana Drought Appeal, the situation of the ongoing drought in Turkana, Northern Kenya has continued to deteriorate. The Kenya Meteorological Society declared that there were no long rains expected in Kenya, striking fear in people all over the country. Our partners on the ground, the Girl Child Network, have informed us that communities are going without meals.

According to Lokale in Turkana, “the boreholes, wells, and water pans are drying up and most of the animals have left, leaving people without a source of food or milk.” Ekuton, from Namorputh in Turkana, went without any meals for two full days in order to allow his children to eat. Our partners stated that livestock is dying, which is a dangerous sign indicating that people are next, especially children, lactating mothers and the elderly.

“The boreholes, wells, and water pans are drying up” 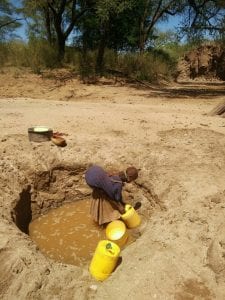 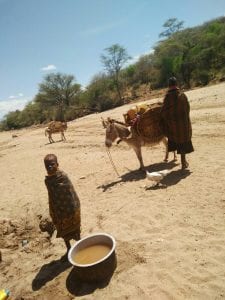 The temperatures are extremely high, reaching 42 degrees and creating a harsh situation for girls and women who are walking for more than four hours to fetch water.

There was some hope earlier this week when some rains fell in the North-West of the County, reducing the distance to water for some people. Fears remain however – unless more rains arrive, then the impact will be negligible with tragic implications. As Peris Mootian, Project Coordinator with the Girl Child Network told us, communities will be sceptical to bring their livestock back from Uganda or plant crops: “The region will need sustained rainfall for at least a month or two for any meaningful regeneration of pastures and increased water levels at the rivers to return.”

The Government has not distributed food since early March and other local NGO’s are struggling to meet the food needs of people in Turkana.

Aidlink is supporting our partners on the ground in Turkana to provide an Emergency School Feeding Programme in the 9 schools we are involved with. This programme will provide students with one nutritious meal per day and will ensure that they remain in school.

In times of drought, the domestic burden of walking for long distances to collect water for families is usually left to girls, who are then denied an education as a result. If meals are provided it will keep students in school. 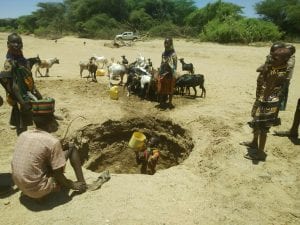 Photo: Collecting water from a deep hole dug in a dried out river bed, Turkana, April 2019

For every day these children are outside the classroom they are at risk, not just of missing out on an education and the chance of a better life, but of sexual abuse and other forms of violence. Girls as young as 11 will be married off by desperate parents looking for a “bride price” to replace the income they have lost because of drought. A typical “bride price” is 20 camels, 10 cows and 100 goats, and due to animals travelling across borders in search of water in times of drought, this is often promised on credit. These girls general have no choice and accept their fate, seeing themselves as the only hope for the helping the rest of their family to survive.

With your support, we can introduce a school feeding programme that will not only save lives in the short-term, but change lives in the future.